Every year about this time, legions of bass anglers across the country pack their boats to capacity with boxes of tackle and start motoring across the water with dreams of catching big prespawn bass they hope to be bragging about by nightfall. What they’ve forgotten are the trials and tribulations of locating and catching these fish during this very same season in years past. For many, the prespawn season, as exciting as it might be to dream about, can be a tough time to find bass.

“It definitely can be a difficult time to locate bass, not only because it’s a major transition period for largemouth, but also because that transition of changing from a winter bass to a spawning bass is not the same on every lake, besides that, in some years it can all happen in less than a week.”

Atkins, who began fishing team tournaments with his father when he was just 12 years old and who now lives on Pickwick Lake, believes the first step in pinpointing pre-spawn bass is understanding the body of water being fished because this dictates in large part how bass act in the early spring. He divides lakes into one of three general categories: deep, clear impoundments, such as Lewis Smith Lake in Alabama, current-driven reservoirs, like Pickwick on the Tennessee River, and basically shallow-water impoundments. like Guntersville and Chickamauga.

“The first rise in water temperature, along with the lengthening of daylight hours, triggers that transition,” he continues. Every lake has an average winter water temperature, and anglers should be familiar with this temperature. In Alabama, for example, water temperatures will fall to 45 or 46 degrees in the coldest part of the winter Once a slight warming trend begins, in which the water temperature only has to rise three, four, or five degrees, fish recognize it.

“A few sunny days in January or February, a ‘false spring’ as many know it, may warm the surface temperature a little and start a good swim jig bite for a few days, but deeper bass don’t feel it at all. I don’t start looking for pre-spawn bass until the temperature breaks the 50-degree mark deeper in the water column.”

On deep, clear lakes, bass winter in deeper water, frequently in ditches and drains that may be 30 to 40 feet deep, where the water temperature is more stable. These may actually be small creeks that run through large coves to empty into the main river channel of the lake. They are well-marked on lake maps and are easy to follow with today’s electronics. Atkins starts his prespawn search in these drainages at about 15 feet.

“Bass slide up these drainages toward the backs of pockets, and they hold around cover — basically anything irregular. Like stumps, rocks, even channel bends, and intersections where another ditch may meet it,” he explains. “Cover is important because the bass have not reached their final destination, and they will stop and wait for the conditions they require.”

This is where Atkıns often fishes a spinnerbait preferably a 5/8- or 34-ounce tandem willow leaf model with size 4 1/2 and 6 blades. He believes the hard thumping vibration of those blades – he lets the lure sink and reels back steadily, keeping the spinnerbait deeper than he can see it is what attracts strikes He’ll work it right beside the cover and even bump it. but he doesn’t stop reeling. In these channels, he’s often casting up on top and bringing the spinnerbait down over the drop.

“On a current-driven river lake like Pickwick,” says Atkins, bass winter in the river, typically by some type of vertical structure like a bluff. so they can move up and down as the temperature dictates but stay out of the current look for them on the backsides of points, or within the first 50 or 60 yards of the cove they might be coming into Where bass in deep, clear lakes are frequently already in the channels leading to spawning areas, river bass are coming from the river into the pockets.

“They’re just moving inside, using ditches and drains if they are present and also utilizing what cover might be available.”

Lure choices here can include the spinnerbait. but Atkins really likes crankbaits and jerkbaits, depending on the cover and structure, and he’ll always stop and fish rock riprap if he finds it. He considers it one of the most dependable types of structure to fish this time of year. The Elite pro believes bass are attracted to riprap because sunlight will warm rocks or at least reflect the sunlight back into the water.

“I stay deep and make 45-degree casts into the shallows to determine the depth bass might be in,” he explains. “I’ll normally be using a Berkley Frittside crankbait or a Berkley squarebill, because I want the lures hitting and deflecting off those rocks I get bites at the beginning of my cast I know the fish are shallow, but if strikes come at the end of my retrieve, I know they’re deeper and I’ll either move my boat our a little further or cast more parallel to keep the lure in that depth.”

“Bass will always tell you what they want if you pay attention to them. This is critical this time of year because there is a pretty narrow water zone they want to be in.”

On shallow reservoirs, bass often spend the winter in less than 10 feet of water. They’ll be behind points, behind grass lines, behind rocks – again, trying to stay in protected water and out of waves and possibly current. As on other types of Lakes, they’ll follow small channels, grass lines, and submerged roadbeds into shallow spawning areas.

On many lakes of this type, coves may have standing timber or flooded brush, and when he’s fishing places like this, Atkins puts the crankbaits away and uses a jerkbait because it works so well around vertical cover. His jerkbait retrieve is nearly always the same sequence: a witch-pause followed by a twitch-twitch-pause. He never pauses longer than about five seconds, because if he’s fishing that slowly, he changes to a different lure, and if bass are using laydowns, dock posts, or stumps, he’ll usually pick up the spinnerbait again.

“I’ll also fish a 1/2 ounce finesse jig around any type of cover,” he explains. “I think of it as a mop-up bait. Just trying to catch one or two additional fish the other lures didn’t get. I’ll only make 10,12. maybe 15 casts with it, hopping it around the cover. I rig it with a Berkley Pit Boss trailer so it’s still a fairly small bait, and while I don’t use it a lot this time of year I always have one ready.”

Atkins also offers this advice to anglers looking for pre-spawn bass on lakes they have not previously fished: Reverse the process and look first for a shallow cove or pocket that could use to spawn in, based on the cover, water clarity, and water temperature. Then, move out from Iha shallow area to the first irregularity. This could be where a deep-water channel bends or meets a shallower ditch, a breakline, a rockpile, even a treeline In a world basically made of water and the bottom, bass are going to get around something different.

“It really helps to just look out from a shallow flat toward deeper water, because sometimes you can see that irregularity,” says Atkins “It doesn’t necessarily have to be that far away, nor does it have to be very large. It just has to be something different that bass can hold on to. Once you idle but a place like this and study with your electronics, you will probably find deeper water more cover or some other feature that Is helping to attract the bass.”

Aikins also suggests anglers fishing new water start their search for pre-spawn bass on the upper end of the lake if they’re fishing early in the spring. Since this water will warm first. Choosing a large tributary as a starting spot is also a good option on new water, he says, because it will be just like a mall lake in itself. Bear Creek on Pickwick is just much a tributary, as are North and South Sauty creeks on Guntersville. When you figure out the type of cover s bass are using in places like this, you can expand into other tributaries while looking specifically for this same type of cover.

“Bass are everywhere in a lake,” he says, “so go into the type of water you’re comfortable fishing. Riprap is common everywhere, especially around roadways that cross smaller tributaries, and you can easily find these on lake maps.”

“The prespawn bass season does not have to be a difficult time to fish if you know the type of lake you’re fishing, but it can happen very quickly. Bass can and do move faster than we realize, and it can occur earlier than we expect it to. I’ve seen the prespawn last only a week, which sometimes happens when a full moon coincides with that first warming trend, so you need to be prepared.”

Why You Should Fly Fish For Bass

I’m always disappointed when a fly fisher turns their nose up at bass fishing. Usually, the disdain is accompanied by some poetic sermon about watching

How To Tie A Palomar Knot

Setting Up The Tokyo Rig For Bass Fishing

Perhaps the hottest way to set up your lure today is the Tokyo Rig. The Tokyo Rig is a deceptively simple set up that allows

One of the most widely sought out fish species in the angling world, bass are tough fighters that can be found all over the earth.

Stabilizing The Spring Bite For many bass anglers, the early spring bass fishing season is one of anticipation mixed with frustration, primarily because unstable weather

There is nothing more exciting than topwater bass fishing and watching a big bass blow up on a surface bait. Given the right time and 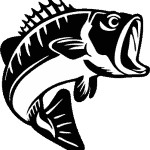 A Place All About
Fishing